I do not sleep

Freddie said “I love to hear the rain” and I said “I do too.”

To walk through his house again to smell the smell of his house and the redwood trees to visualize him pushing his walker down the hall stopping briefly at the living room door where I slept on the couch to say “Mom I am sorry about the things I said last night.” and I would answer “I am sorry as well for my behavior. I love you.” and he would go into the kitchen to make his breakfast or take his medicine.

To see him feed his worms; work in his tomato pots on the gorgeous deck, in the sun; eat watermelon with his friend, Ron, who came for an hour each Wednesday. He did not have many visitors dropping by because of his illness.

to hear him call me during the night “Mom, I am going to be sick”

to hold the basin and clean it after he vomited

to pull up the syringes for him even though I simple could not bring myself to give him the shot, rescue shot, in the abdomen. I wish I could have but it hurt me to much to think about it. My fear of hurting him. He hated giving himself the shop but he needed it to live.

i could have learned on an orange.

I must tell all the stories before I forget.  I have to write my way through this if I am going to live.

“Believe in yourself! If cauliflower can become pizza, you can do anything.”

I do not even like cauliflower and have not eaten pizza since December 17, 2016. I do believe in myself and my ability to survive whatever life throws my way, even though it has not been easy to survive the death of my son.

I will never eat Domino’s pizza again for the rest of my life. The last night of Freddie’s life, after dialysis ended, he was hungry and it was late. He wanted Domino’s pizza. I did a search for Domino’s pizza and found the place I thought was nearest the hospital. I placed the called and was told that they did not deliver to Dominican Hospital; therefore, I asked if they could give me the number to the one that could delivery to the hospital because, as I told them, Domino’s had delivered to us before. The young lady was very snippy, in that California kind of way and said, “I do not know,” and hung up.

I beat the phone on the cot and put my head down and cried. Freddie said, “Mom, don’t cry. Maybe the hospital can give me another one of those cold turkey sandwiches.” He hated those sandwiches and I knew he did but that was all we could get at that time of the night. I even walked to the cafeteria area looking for anything that would taste better than that awful looking turkey sandwich but found nothing. I did make some hot tea for him, I think. I do not remember.

What I do remember is that he never took a bite of that sandwich and after he died the next day, it still was on the tray in his room. He died at 3:05 on a Sunday and as was customary the hospital brought all kinds of fruit and cold sandwiches and whatever; I do not remember. All I could think was where was all this food when Freddie was hungry. Why now? I did not eat any of the food. The two friends (not really, I had just met one of them but at least she was a friend of a friend and felt like a friend; someone not originally from California) took the food with them.

I would ask that you not eat Domino’s pizza but that would not be fair to you. I just ask that you not expect me to ever eat their pizza again. I turn the sound off when their commercials come on because it makes me sad. The last meal my son wanted…and they failed to deliver.

I gaze to the far

those hills?’  We lived

I never saw that

“I see son, the trees

These are original paintings and are copyrighted. Unauthorized use is prohibited.

Freddie was 12 when he started painting. His teacher thought he was gifted. He was in a number of art shows here in Huntsville. We could have sold his paintings, but I never sold even one. Since his death,

I have made prints of two, and given as gifts, not pictured here.

Jackie also painted at the same time. She was 9, and was quite good. She said once to me, “you and Freddie were the ones talented, not me.” However, she understated herself. 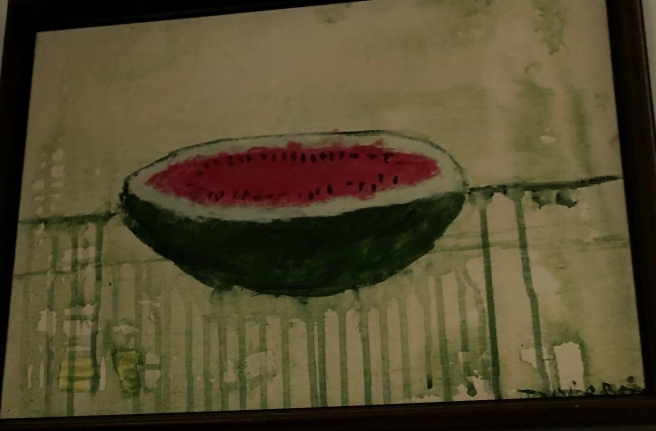 This is an original painting and is copyrighted. Any unauthorized use is prohibited.

Today I am grateful for a warm home. Physically it was not my best day.

My daughter called. Then I fell asleep before calling my sister. I always call her every night at 6:30 but tonight I was asleep. It worried her that I did not call on time.

My daughter when she was very young.

My sister at Thanksgiving with our great nephew who just started High School. He is kinda tall. She is 87! Doesn’t she look good? Still very pretty and active.

All my memories of Freddie is behind me; however, I have a daughter with whom I can and will make new memories. I will share my past memories of Freddie with you.
Dreams…what do you dream? I dream of an America that is a true Republic. I dream that one day the two political parties we have now will decide to agree to disagree and get on with the business of our country. I am tired of paying for politicians who do nothing but whine and make up lies. I dream of a media like I grew up with. Not what we have now. I dream of the days I spent with Freddie and Jackie as children before life happened.
All who love me are not around me physically. Do they need to be? No. In this shrunken world of text, telephones, Face Time there is no excuse not to communicate with those you love.
Contrary to what some people may think, I do have all I need within me. 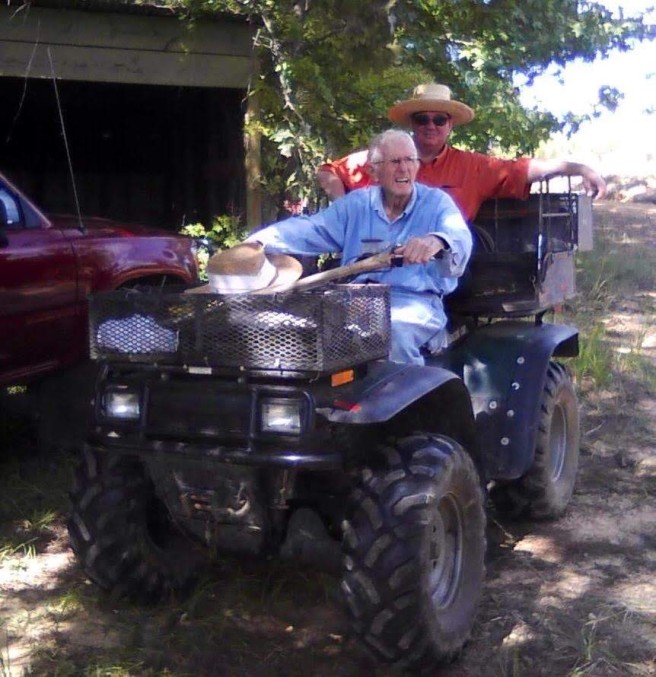 Freddie and his Uncle Bub on the Four Wheeler surveying our 200 year old farm; finding the property lines on a hot July day in 2014. He loved the farm, as I do. This was a good day for all of us. Bub died as I held his hand. He was a WWII Marine veteran serving on Okinawa.

My beautiful daughter, husband and son on vacation this past summer on the Cape, Linger Longer By the Sea Vacation Rental, in Brewster, MA, not far from where we had stayed earlier in June in Eastham.  When she lived here in the south her hair was golden blonde. Leaving in the north with less sun, it is no longer blonde…please notice her blue, blue eyes…the only thing I think she inherited from me. Strong genes run through my family for those blue eyes. My Mom had brown eyes; my dad had red hair and blue eyes and so did I. My husband had brown hair and brown eyes…and she has/had blonde hair and blue eyes. Not the dominant gene!!

Do not mess with our blue eyes.

Rain has been steady all day. The first day of the year was lovely, however, I was not well. Today the same thing, so I have not gotten any tasks done. I remember how well Freddie looked in July 2015 and then how he looked in 2016. (See Below) There is a book “But you look so good”. It is about neuroendocrine cancer. I thought about what might be ahead today and hoped that I would be as kind and caring as Freddie was to everyone. I suppose I will feel better tomorrow. I would like to write each night as a report to myself on this journey. Next week I see my oncologist. I will find out how I am doing cancer wise.

No matter how much time passes, memories are relived every day and the thought, death is forever. It does not lessen the pain.

You choose the path to

what this decade holds for you